Official Sponsor of the India Tour of Ireland 2022 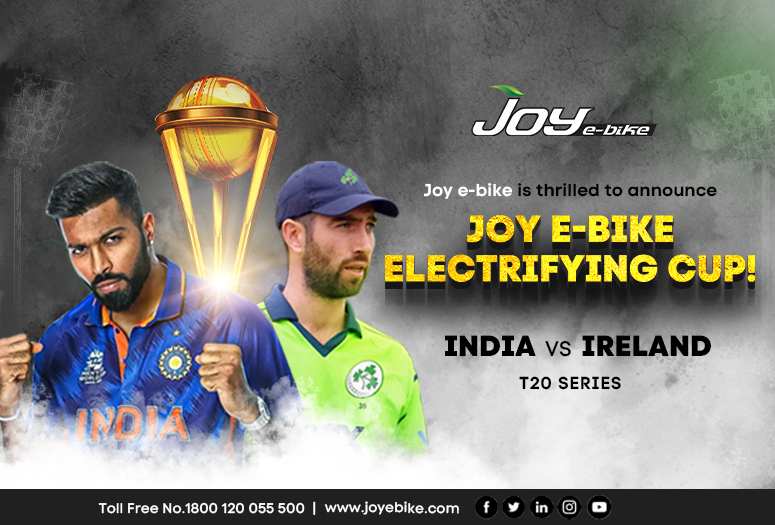 Official Sponsor of the India Tour of Ireland 2022

Announcing our association with the India Tour of Ireland 2022, as an official sponsor of the India Vs Ireland T20 match.  As part of the series, the “Joy E-Bike Electrifying Cup” will be awarded to the Man of the series and super 6’s on both nights.

In Dublin, the Indian team will play two T20 International matches under the captaincy of Hardik Pandya. Averaging 28.86 and striking at 154.78, Hardik has played 66 IPL matches and amassed 1068 runs. In addition, he has scored 3 fifties, with the highest score being 91 runs.

The Indian team will be visiting Ireland next week, this would be their first visit to the Irish state since 2018.

It was the first time both teams had faced each other during the 2009 T20 World Cup at Trent Bridge in Nottingham, England. In the first T20I of the group, India won by eight wickets. Zaheer Khan bowled his best figures in his career (4/19) as he scored a century.

The Indian and Irish teams have announced their squads in preparation for their two-match T20I series. Indian captain Hardik Pandya will lead a team of 17 players to Ireland, while Andrew Balbirnie will lead an Irish squad of 14 players.

It’s going to be a thrilling match between India and Ireland!

In the best of luck to Hardik Pandya and all the other team members, JOY e-bike wishes them every success in their endeavors