Raise hands for the men in yellove! 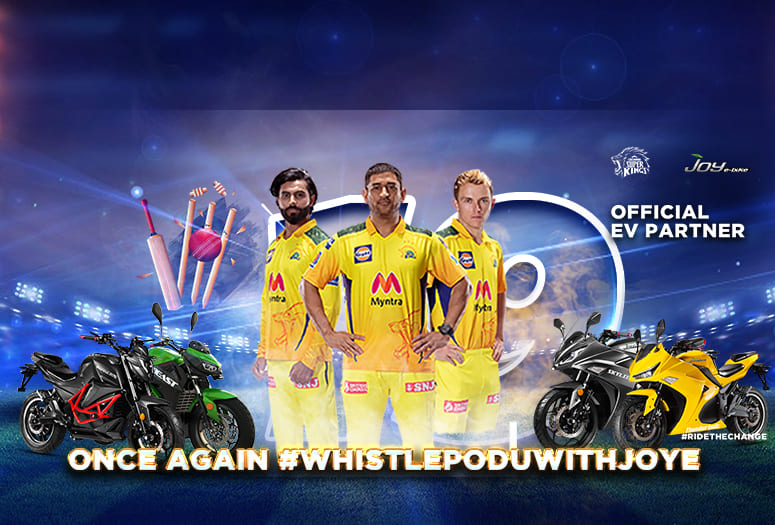 Raise hands for the men in yellove!

It was indeed a hard time for all the IPL fans out there as the most celebrated cricket league was suspended due to the wave of the pandemic.

On 4 May 2021, the tournament was suspended indefinitely, after a rise in COVID-19 cases within the bio bubbles of respective teams. At the time of the suspension, 31 of the scheduled 60 matches were still left to be played.  On 29 May 2021, the BCCI announced that the remaining matches of the tournament would be played in the United Arab Emirates in September and October 2021.

But the most awaited time by the fans is just a few days away. The remaining matches of the Indian Premier League (IPL) 2021 will be held in UAE.

Indeed it was a hard time for the IPL fans as the thrilling season of the league was interrupted, but we being the official EV partners of Chennai Super Kings took the responsibility on the team’s behalf to keep up the series of breaking records.

Joy E-bike has made record-breaking sales with 2001 Bikes to the credit of our squad of more than 194 dealers, successfully hitting the wicket of ever-rising pollution. The supers are ready to show their power and ready to battle with the stunning performance! We, the team of supers are all set to support our squad of Lions.

So when the IPL fever hits again this September, we are sure the yellove army is ready to support one the most praised squads in the history of IPL.

The colour of spirit is yellove

They have some foreign players under the coolest captain with a strong Indian core into the team when even the idea of T20 cricket wasn’t yet sunken in the viewer’s minds.

After losing the final off the last ball in 2008, and the semi-final in 2009, CSK secured back-to-back titles in the next two seasons. But after two years of being away from the yellow cap, they made a stronger comeback. CSK took the trolling ‘Dad’s army’ very seriously and proved who’s dad, literally and marked their return with their third title.

It was in 2019 when they just missed the crown of victory against their rivals. Yet after all the dark patches, they made an incredible comeback, because after all, they are the ultimate Kings!

It’s the super consistent team in all the seasons with three titles and has been under fourth place only once in all the 14 years of the premier league. They are the lions, they are the supers, they are Chennai Super Kings!

So in a world full of yellove, we know YOU are a super fan of the yellove army. The fever of IPL is back again and we don’t want hardcore CSK fans to miss out on any of the CSK updates.

The yellove is in the air

While most teams cast lights on their owners, Chennai is the team truly known for the authentic game it plays. Here’s who all are raising hands in the squad of the Kings.

As the second segment of IPL is about to start off, these are a few top players who are sure to give rivals a tough time.

Keeping up with the high win percentage like always, Chennai Super Kings (CSK) made a strong start in 2021 when they ranked up on the second position in the points table after winning five out of seven games. Even if these records had to pause for a while, the lion is ready to come back stronger.

Being an official EV partner of the CSK, we are all set to take you on the electrifying journey again in IPL’s better half. We will keep you up with the bash about everything going on with #Whistlepodu.

Here is all you want to know about the IPL

Joy E-bike is gearing up to resume the digital campaign called, once again #WhistlePoduWithJoye in line with the brand’s spirit to lead the EV market and spread the IPL fever.

CSK is now all geared up to be true to its crown of being the most successful team of the IPL. After a little shocking setback for the men in yellove in 2020, where CSK couldn’t be in knocks. But the most decorated captain in sports will surely guide his team to victory.

They are just a place away from the Top

With 10 points against their name along with a solid Net Run Rate of +1.263, the team has swiftly made it up to the top four in the first league of IPL 2021. The well-wisher is seen hoping that the gap of a few months won’t hamper the momentum of the yellove army. We know you are waiting for Mahi to finish off in style!

So all the Superfans out there, get ready for some good cricket that is about to start on the 19th of September. Wear your yellove caps to support your favourite team, the storm of IPL is yet to come.

The three-time champions and five-time-runners up, Chennai Super Kings led by Thala, CSK are a cool mix of youth and experience in their ranks.

IPL 2021: Let’s be ready and hope to see them bagging the Title!